Want to play some nature sounds or ambient noise on Linux? Blanket is a really good choice with a stylish user interface.

As far as know, there are 2 good open-source applications in Linux for playing ambient sounds. They are ‘Blanket‘ who has a good design on its UI, and ‘Anoise‘ which has many more cool sounds but looks ugly.

For Ubuntu 22.04, Fedora 36 or Arch Linux user with GNOME 42, Blanket looks more native because of the dark mode support and GTK4 + libadwaita port. 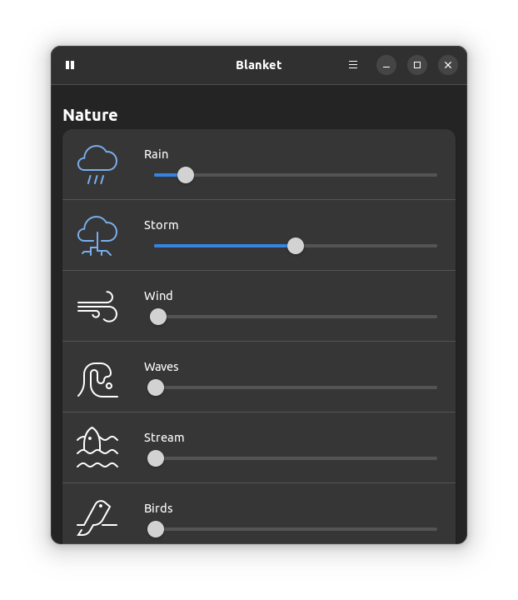 As you see in the picture, it can play some nature sounds including Rain, Storm, Wind, Waves, Stream, Birdsong, Summer Night, as well as a few travels, coffee shop, and other noises.

The app starts playing either by clicking on a sound icon or moving the volume control slider. It supports multiple sounds playback. All playing sound icons are highlighted. By clicking on the icons can mute/un-mute them, though there’s a global start/stop button in the top-left. Though it has only more than a dozen of sounds, there’s “Add Custom Sounds” button in the bottom to add your own sounds. And, it supports presets and can run in background and control via the Clock menu button. Install Blanket in Ubuntu & other Linux:

The app is available to install as Flatpak for most Linux. Just follow the official setup guide.

For Ubuntu, press Ctrl+Alt+T on keyboard to open terminal and run command to install the daemon:

Then install Blanket as Flatpak via command: For those prefer the classic .deb package, there’s an official Ubuntu PPA. Though the package there may not be the latest due to dependency issue.

To add the PPA, press Ctrl+Alt+T and run command in terminal:

To install the Blanket via deb package, run command: How to Remove Blanket:

For the Flatpak package, remove it via command:

To remove the package from PPA, use command:

And remove the Ubuntu PPA by running command in terminal: