Lazarus is a free Delphi compatible cross-platform IDE for rapid application development using the Free Pascal compiler. User may install the project either from Ubuntu repository or by using the official DEB packages. Ubuntu includes Lazarus in its own repositories, but it does not provide updates for the package. So the package will always be old, though Ubuntu 21.10 has v2.0.12, most recent release at the moment.

To install the package, press Ctrl+Alt+T on keyboard to open terminal. When it opens, paste the command below and hit Enter:

This command will install Lazarus, fpc compiler, as well as all other required packages: 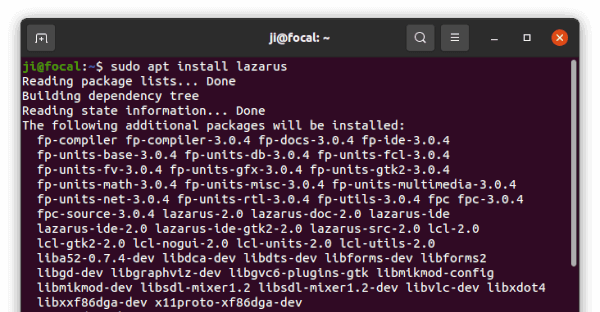 Once installed, search for and open the IDE from activities overview and enjoy!

The IDE provides official Linux packages available to download at the sourceforge.net. You can always get the latest version from the link button below, though it’s only provides packages for modern 64-bit and old 32-bit PC.

The official deb packages are made up of:

Grab all the 3 packages. Then, open file manager and go to ‘Downloads‘ folder, right-click and choose ‘Open in Terminal‘ to open terminal with that folder as working directory. Finally, run command to install them: NOTE: the official package conflicts with the one in Ubuntu own repository. Though the IDE supports for having multiple package versions in same system, installing Lazarus via either way in this tutorial will remove another (if any) automatically.

And it will prompt to either upgrade or downgrade configuration when switching between different app versions on first startup. To remove the Lazarus IDE, run command below in terminal will do the trick for the software installed via both methods.