To run Microsoft Windows applications in Ubuntu Linux, Wine or CrossOver (paid version) is a good choice. And here’s how to install and use Wine in Ubuntu 22.04 LTS.

In this tutorial, you’ll see 2 ways to install Wine in Ubuntu. Choose either one that you prefer.

Ubuntu included Wine package in its own repository, though it’s old. User may simply press Ctrl+Alt+T on keyboard to open terminal and run command to install it:

Type user password (no asterisk feedback) and hit Enter to authentication for sudo. After installed package run winecfg in terminal to generate configuration file. And, run command to make link the .desktop file:

Finally, you may right-click on an EXE file to run via “Wine Windows Program Loader” option: 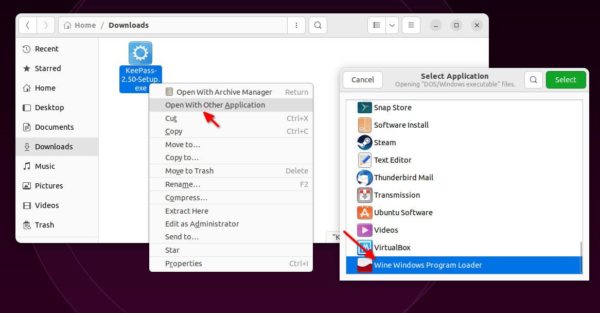 Install Wine from its official repository:

The Wine developer team provides an official apt repository for Debian/Ubuntu based systems. By releasing v7.6, it added Ubuntu 22.04 support.

The repository now has updated with new method to install the key to follow Debian policy, as apt-key is deprecated

Press Ctrl+Alt+T on keyboard to open terminal. When it opens, run command to download the key:

Then install the key by moving it to ‘/usr/share/keyring’ directory: Next run the commands below one by one to download the repository setup file and move to “/etc/apt/sources.list.d” directory.

NOTE: This command is for Ubuntu only. “$(lsb_release -sc)” returns system’s code-name. For Linux Mint and other Ubuntu based system, replace it with jammy (22.04), focal (20.04) or bionic (18.04) depends on which Ubuntu edition your system is based on. Before installing them, you may need to run sudo apt update to refresh system cache. Then, install one of the packages by running command below in terminal:

NOTE: It does not re-build old packages for new supported systems. So winehq-stable is not available for Ubuntu 22.04 until next stable release (v7.0.1 or v8.0)

After installation, right-click on your EXE file and start it via Wine program loader option. See if you app works with wine. How to Remove Wine:

There will be local configuration files and app data left under .wine and .local/share/applications. They are hidden folders, press Ctrl+H in file manager to toggle display and remove them as you want.

And remove the repository key via command: