The free open-source Inkscape vector graphics editor got a new maintenance release for the 1.2 series.

The is the second update for Inkscape 1.2, which finally makes OpenClipart import available for Windows and Linux user using AppImage. And, Color extensions works on patterns again.

For macOS, spellchecking finally works and undo/redo options are back in the menu. For Linux, the snap package is no longer possible to install with --classic option. Meaning the snap won’t be able to access data outside of user’s home directory.

Other changes in Inkscape 1.2.2 include:

There are as well various other bug-fixes and improvements, see the release note for details. How to Install Inkscape 1.2.2 in Ubuntu & other Linux

For Linux, it’s available to install via AppImage, Snap, and deb (through PPA), and Flatpak.

Snap is an universal package that runs in sandbox. Ubuntu 20.04 and higher can simply search for and install Inkscape as Snap from Ubuntu Software: AppImage is a portable package works in most Linux. No installation required, just grab the package (via link above), enable ‘Allow executing file as program‘ in file Properties dialog. Finally, click Run the package to launch the editor. 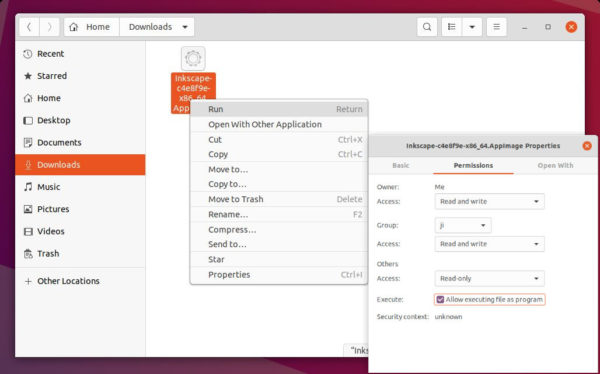 For the native .deb package, it has an official stable PPA contains the latest package for Ubuntu 20.04, Ubuntu 22.04, and Ubuntu 22.10.  Not only for modern 64-bit OS, the PPA now also supports for arm64/armhf architecture types.

1. First, press Ctrl+Alt+T on keyboard to open terminal. When it opens, run command to add the PPA:

2. Then either install the image editor as native .deb package via: Or use ‘Software Updater’ to upgrade from an old version: Ubuntu 20.04 and higher and follow the steps below to install Inkscape as Flatpak package:

Depends on which package you installed, choose from the methods below: