By releasing Wine 6.20, Wine now provides the packages for Ubuntu 21.10 in its official repository.

Wine is a free open-source software allows to run Windows apps in Linux, macOS and BSD. The latest development release now is Wine 6.20 that features: Press Ctrl+Alt+T key combination on keyboard to open terminal, then run the commands below one by one.

While modern computers now have 64-bit CPU architecture, Wine is a 32-bit software. So you may first enable the 32 bit architecture support by running command in terminal:

2. Install the key for Wine repository.

Since apt-key command is deprecated for security reason, here I’m going to tell the new method to install the third-party repository key in Ubuntu. Though apt-key is more effective and still works, you may use it if not care about cyber security!

a.) Firstly, run command in terminal to download the key:

b.) Next, convert the key into gpg by firstly importing it into a temp keyring, then exporting it to gpg:

c.) Finally, create the “/usr/local/share/keyrings” directory, and put the key into that location: 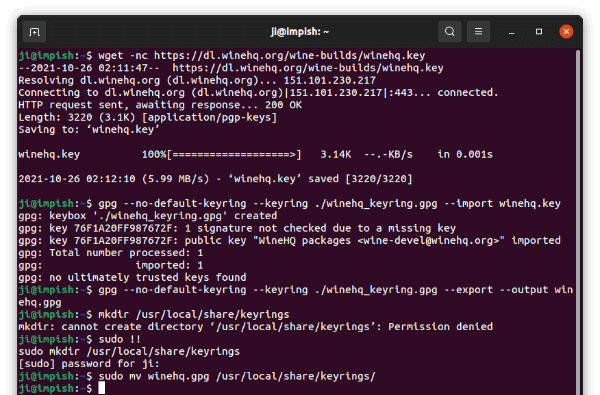 3. Add Wine repository to your system:

After installing the key into “/usr/local/share/keyrings”, you may add the Wine repository by creating a config file and writing a line into it. And, it can be done by running the single command in terminal:

NOTE: the command above is only for Ubuntu 21.10. For other Ubuntu editions, change impish in command to your system code-name (e.g., focal or bionic). And you can run “lsb_release -c” in terminal to check it out. For Linux Mint, Elementary OS and Zorin OS, do use the based Ubuntu codename.

And install the Wine 6.20 (development release) by running command:

After installation, use winecfg command to bring up configuration editor. And, right-click on EXE file and choose “Open with Other Application -> Open With Wine Windows Program Loader” to get start installing a Windows app.

Clean up or Remove Wine:

After installing the repository key, two useless files (“winehq.key” and “winehq-keyring.gpg”) are left in home directory. You may remove them via the file manager.

To remove the Wine repository, simply remove the file under “/etc/apt/sources.list.d” via the command below or use “Software & Updates” utility via “Other Software” tab.

And remove the key if you want via command;