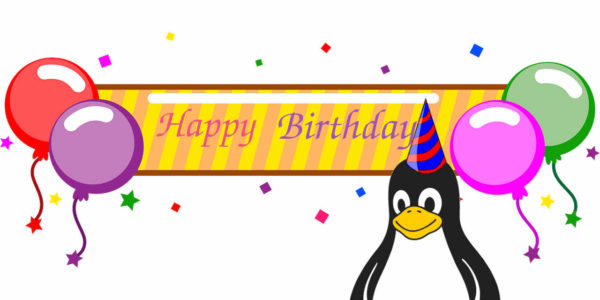 Today, August 25, is the 30th anniversary of Linux!

It was 30 years ago that Linus Torvalds announced the operating system, just a hobby!

Hello everybody out there using minix-

I’m doing a (free) operating system (just a hobby, won’t be big and professional like gnu) for 386(486) AT clones. This has been brewing since april, and is starting to get ready. I’d like any feedback on things people like/dislike in minix; as my OS resembles it somewhat (same physical layout of the file-sytem due to practical reasons)among other things.

I’ve currently ported bash (1.08) an gcc (1.40), and things seem to work. This implies that i’ll get something practical within a few months, and I’d like to know what features most people want. Any suggestions are welcome, but I won’t promise I’ll implement them 🙂

Linux is a family of open-source operating systems based on the Linux kernel. The Kernel now has more than 31 million lines of code. And there are almost one thousand Linux distributions exist.

100% of the world’s top 500 supercomputers run on Linux. It’s trusted by NASA and JPL to run a helicopter on Mars.

And Linux is getting better and better on desktop with the power of GNOME, KDE, X11, Wayland, Ubuntu, Fedora, and the open-source communities!

Join us in celebrating 30 years of Linux

The Linux Foundation has some great images for the 30th anniversary. Get one and help celebrate Linux’s birthday on either social media or your mobile device.